In Greek mythology, the Ocean, son of Uranus and Gaia, was the great and
wide river surrounding the earth, whose streams returned to the point from
which they started (opsorroos), and continuously flowed without sources or
outfalls. Eos, the Sun and the Stars rose from the Ocean and were then
again immersed into it as they set. The Ocean was the primordial element
of the world, the father of the gods and the creative component of all things.

Within the works of Homer, the disciple of God,Plato in “Theaetetus”,Aristotle
in “Metaphysics” and Evdimus in the “Peripatetic history of Theology”, are the
assertions that everything is derived from flow and movement, that is, from
Ocean and Tithyn, who are presented as the parents of all the gods. The
Ocean is also depicted on the shield of Hercules and Achilles .

(Statue of the Ocean in Rome) 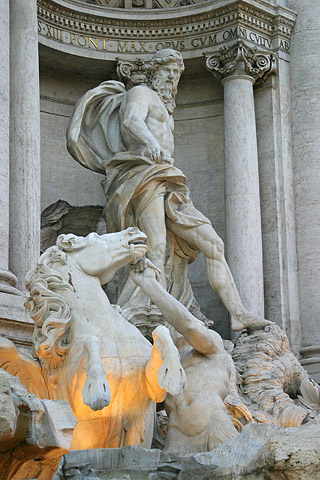